An interview with Elisabeth Tonnard

Agnieszka Gratza: Could you tell me about your background and how you came to work with the artist book format?

Elisabeth Tonnard: My background is mostly literary; I studied literary theory and comparative literature for my first degree in the Netherlands. A study of the classics of Western literature: not very experimental at all. There was no component in it on artist books or conceptual literature. After that, I started writing myself but only with great difficulty. You study the classics so much that at first you think, ‘There's so much out there already, what can I contribute?’ As time went on, spontaneously I began making some works that had a more visual component but they were literary and had to do with language. My first book is the reworking of a poem by T.S. Eliot, ‘The Love Song of J. Alfred Prufrock’. It's a series of poems I developed out of one strophe by applying Tipp-Ex, the correction fluid, to the existing text and seeing which meanings would come out when you covered up some parts. I could turn the word ‘what’ into ‘hat’ by making the letter w white, for example. 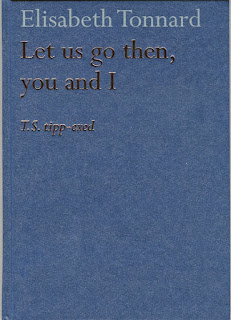 That work was made very quickly; I then spent two years trying to get it published in Holland. It did not fit any literary publishing house, nor any art publishing house. At the time I did not have much knowledge of artist books at all. I knew artists but not artists working with books. I come from a family of artists yet I've always kept away from art, focusing on literature instead. After commenting on my work, an uncle who was an artist suggested that I apply for a grant to publish this book myself. After two years of trying to publish it with a publisher, I got a grant and I was able to publish it myself. I worked with a printer and a binder but I designed it, determined the content and chose the paper. 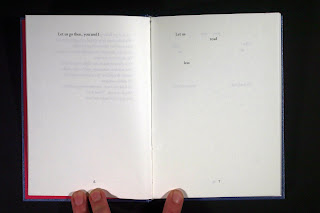 AG: Thinking about your wider publishing practice, the books that you make are largely, if not exclusively, self-published in Leerden, your home town. How do you go about publishing them?

ET: They are published wherever I am living. I published some in Berlin and some in Rochester, New York when I lived there. It works differently from book to book. I am currently working on a book I printed myself and that I'm also binding myself, regrettably, I have to say, because it's really too much work. I have a type of inkjet printer that I like to work with. I never used any kind of letterpress or traditional printing press techniques. I mostly have books printed at printing houses and most of the time it's digital printing.

AG: Your catalogue of books lists over 40 items that appeared between 2003 and 2018. Some books are published in limited editions, others as open editions. What dictates whether they are one or the other?

ET: It's sometimes a matter of what I felt like at the time, I have to confess. It's also down to practical issues. I once made an edition where I thought I would make 30 books and I got stranded at 29. For technical reasons I wasn't able to make any more, so then it became an edition of 29. On another occasion, I bought a stack of paper at the paper factory and I could only make so many books out of that one stack. I like the idea of an open edition in the sense that it is then not limited though in a practical sense it may be. You can do it when you do a digital print run. You could make a hundred copies, for instance, and if they're sold out you order more. But the paper you used in the first instance or the printer may have changed, so it ends up being different to the original run. Over the years I've found that it's actually really inconvenient to keep a book available. You just want to go on to the next project when it's sold out and not have to think ‘How did we do that, again?’

AG: Although technically you're not a publishing house, it's very much a business that you manage yourself. You have a webshop and you process orders. Nine of your titles are listed as sold out. The books range in price from 0 euros for The Invisible Book which sold out instantly to 985 euros for the special edition of Song of Myself, which stands out because the other ones are much more reasonably priced. What is special about it?

ET: The special edition of that project I printed myself. It's also quite large, A3-sized, and it comes in a portfolio. It's a very limited edition of seven copies only. That all adds up to a higher price. It's also the last copy that's left now. The price was actually raised. The book version was printed by a printer as a cheap small paperback. 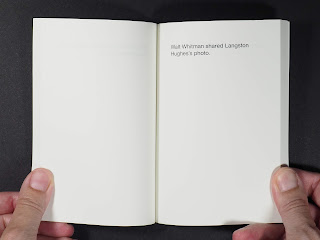 AG: Song of Myself was presented at Friends with Books in 2015. It was at once installed, as part of the group exhibition curated by Savannah Gorton, I have always imagined that paradise will be a kind of library, and presented on a book stand alongside other books you've published. For me, one of the appealing features of a number of your books is that they come in bound versions that can also be deployed as installations. Could you explain how that worked at Friends with Books?

ET: It was a special edition of the A3 sheets that was shown there. I should first say a little bit about the content of the book. It's called Song of Myself: American Renaissance and it's based on Facebook status updates. The title is a quote from a poem by Walt Whitman. I first found one by Edgar Allan Poe that read ‘Edgar Allan Poe likes his own link’. So I started collecting those updates by Edgar Allan Poe but then I also thought of other authors from the time when he lived, the American Renaissance: Walt Whitman, Emily Dickinson, Henry David Thoreau, Ralph Waldo Emerson, Herman Melville, Nathaniel Hawthorne. I found it extraordinary to think of all those authors doing these very shallow things. Just imagine Emily Dickinson posting a photo of herself. But then what would they actually do if they lived now? The installation at Friends with Books, which took place at the Hamburger Bahnhof that year, was spread over a single wall. I really liked the fact that I could install those sheets of the special edition as a grid on the wall because where people post their updates on Facebook is also called ‘the wall’. So it made sense to show it like that. 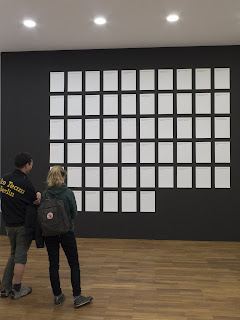 Above and Below: Song of Myself (special edition). Leerdam, 2015.
Installation view in the exhibition I have always imagined that paradise will be a kind of library,
Friends with Books: Art Book Fair Berlin at Hamburger Bahnhof, Berlin, 2015.
Images courtesy of Elisabeth Tonnard. 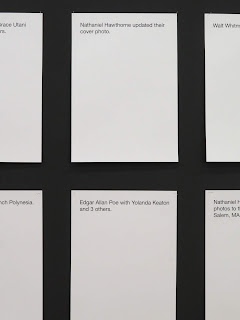 AG: Your books strike me as both formally and materially inventive in so far as you experiment with format, typography, layout and even paper brand which all have a meaning you attempt to convey.

ET: I take this into consideration with every book. At the Visual Studies Workshop in Rochester, New York, which is where I began to learn about artist books, I worked with an archive – the Joseph Selle collection of photographs – housed in the same building. I made a book out of that collection called Two of Us. It combined digitized materials from the archive in which I saw a pattern of doubles walking next to or behind each other in the street with a poem by Baudelaire about seeing the same old man several times over in the street and how uncanny that was. The double is a literary motif, that of the doppelgänger. Going back to the materiality of the book, Two of Us was designed as a novel, in other words not published or printed on shiny coated paper that you see in an ordinary photo book, which would have been great for showing the images. But I wanted the whole book to have a literary feel, to look like a novel on the outside, with the kind of paper that evoked a novel. It also has text on the same pages as the photographs. 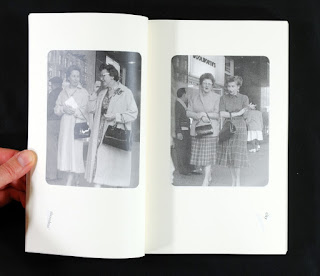 AG: A collection of your poetry in Dutch recently came out published by het balanseer in Ghent, not self-published in other words. Is that the direction you're heading in or are you still excited by self-publishing?

ET: I will definitely keep self-publishing but I see the poetry work that was published by that publisher as a separate thing. Within the field of literature, at least in the Netherlands, it's definitely not regarded very highly to self-publish. That means nobody wanted to publish your poetry. It's best as a writer to publish through the regular channels and in literary magazines. But for artist books that's different; I find that the best work is self-published. Of course it's really developed now, much more than when I first started. There are a lot of artist book fairs now where you can see work. That wasn't so much the case when I started self-publishing.

AG: Joachim Schmid's name crops up in some of your book projects, like The Invisible Book, The Lovers and Joachim Schmid Works, but have you ever worked together or collaborated on a project?

ET: We haven't been able to do that yet. We've responded to each others' works. For instance, he made E-Book, based on a letter he wrote to me. He left only the e letter and everything else he made white, referencing my procedure with Tipp-Ex. He then photographed es in the cities we visited together. And then I published Joachim Schmid Works, showing photographs of him working on that E-Book. He's known for never taking any photographs, so it was a little joke on my part to show that he's constantly taking photographs. But we haven't done an actual project together. 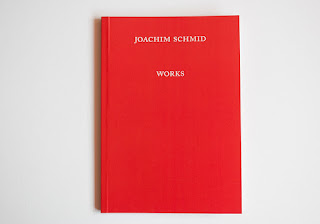 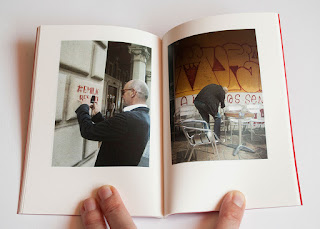 AG: Do you ever work collaboratively with people on your books?

ET: I don't think so actually, other than with poets who are already dead. (Laughs.)

AG: Why is that? A book project, at least in my experience of editing an artist book, can be a deeply collaborative experience, for better or for worse. Because of the nature of that particular project, I ended up working closely with all the contributors, the graphic designer, the printer, the binder. And suddenly the project felt out of my control.

ET: That's exactly what I try to avoid though I do collaborate with binders and printers. But I don't have them say how it should be done. I ask for their advice and sometimes they have good ideas but I try to keep it within my vision.

AG: Would you say that's one of the advantages of the artist book format? That you can go with your vision?

ET: Yes, absolutely. The advantages include speed, if you don't have to ask everybody what they think. I made some of my books really quickly, in one night, and sent it off to a printer. You can go as slow or as fast as you want, really. But the end result is a coherent piece and not some sort of Frankenstein's monster book. 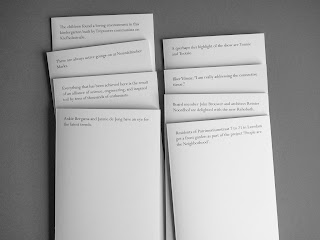 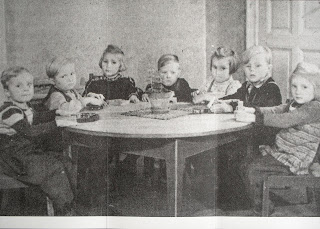 Posted by Friends with Books at 09:29